Cyber security expert Dr. Kershavarz-Nia has reviewed election data and made the following findings under oath as summarized by Andrea Widburg:

“…The propaganda media are trying to discourage Trump supporters by reporting on court losses for the legal team and emphasizing what they characterize as disorganization among the hastily assembled teams of lawyers. Don’t fall for the psy-ops!

The Mainstream media had a field day yesterday, citing a scathing decision written by a Trump-appointed judge on a 3-judge panel of the Third Circuit Court of Appeals, rejecting an attempt to get hinky Pennsylvania ballots thrown out because of fraud. Read Politico’s account for a sample of schadenfreude:

But in an entirely different case brought in Pennsylvania state courts, the Trump team’s victory was important. William A. Jacobson, Clinical Professor of Law at Cornell University and proprietor of Legal Insurrection, explains:

A Pennsylvania state court Judge has issued a preliminary injunction preventing Pennsylvania from taking any further steps to perfect its certification of the election, including but not limited to appointment of electors and transmission of necessary paperwork to the Electoral College, pending further court hearings and rulings. The ruling upholds an injunction from earlier in the week, and is significant because of the findings made in the Opinion released tonight.

The Judge found, among other things, that the plaintiffs were likely to prevail on their PA constitutional claims, and that the matter was not moot even though PA had “certified” the results, because there were more steps to be taken…”

“…A Pennsylvania state court Judge has issued a preliminary injunction preventing Pennsylvania from taking any further steps to perfect its certification of the election, including but not limited to appointment of electors and transmission of necessary paperwork to the Electoral College, pending further court hearings and rulings. The ruling upholds an injunction from earlier in the week, and is significant because of the findings made in the Opinion released tonight.

You can read the Opinion here.

Here is the judge’s description of the plaintiff’s claim:

“…In the Petition, Petitioners allege that the Act of October 31, 2019, P.L. 552, No. 77 (Act 77), which added and amended various absentee and mail-in voting provisions in the Pennsylvania Election Code (Election Code),1 is unconstitutional and void ab initio because it purportedly contravenes the requirements of the Pennsylvania Constitution. Petitioners allege that Article VII, section 14 of the Pennsylvania Constitution provides two exclusive mechanisms by which a qualified elector may cast his or her vote in an election: (1) by submitting his or her vote in propria persona at the polling place on election day; and (2) by submitting an absentee ballot, but only if the qualified voter satisfies the conditions precedent to meet the requirements of one of the four, limited exclusive circumstances under which absentee voting is authorized under the Pennsylvania constitution. (Petition, ¶16.) Petitioners allege that mail-in voting in the form implemented through Act 77 is an attempt by the legislature to fundamentally overhaul the Pennsylvania voting system and permit universal, no-excuse, mail-in voting absent any constitutional authority. Id., ¶17. Petitioners argue that in order to amend the Constitution, mandatory procedural requirements must be strictly followed. Specifically, pursuant to Article XI, Section 1, a proposed constitutional amendment must be approved by a majority vote of the members of both the Pennsylvania House of Representatives and Senate in two consecutive legislative sessions, then the proposed amendment must be published for three months ahead of the next general election in two newspapers in each county, and finally it must be submitted to the qualified electors as a ballot question in the next general election and approved by a majority of those voting on the amendment. According to Petitioners, the legislature did not follow the necessary procedures for amending the Constitution before enacting Act 77 which created a new category of mail-in voting; therefore, the mail-in ballot scheme under Act 77 is unconstitutional on its face and must be struck down. Id., ¶¶27, 35-37. As relief, Petitioners seek, inter alia, a declaration and/or injunction that prohibits Respondents from certifying the November 2020 General Election results, which include mail-in ballots that are permitted on a statewide basis and are allegedly improper because Act 77 is unconstitutional…”

“…One of Braynard’s biggest findings involved voters who had submitted a National Change of Address form to the post office, indicating they had moved out of state, yet appeared to have voted in 2020 in the state they moved from.

In Georgia, the team found 138,221 such people, which represents a much larger number than the state’s current vote differential (12,670) in the presidential race.

Braynard said the numbers are high enough that they could “easily” overturn current election projections.

“The number of questionable ballots surpasses the vote margin in at least three states right now—Arizona, Georgia, and Wisconsin,” Braynard told The Epoch Times on Nov. 25. Those three states have a combined total of 37 electoral votes.

“This isn’t speculative. This is just what the data shows.”…”

Our Brains Explain the Season’s Sadness

A Resolution Declaring the results of statewide electoral contests in the 2020 General Election to be in dispute.

“…THEREFORE, be it RESOLVED that the Pennsylvania House of Representatives—

1. Recognizes substantial irregularities and improprieties associated with mail-in balloting, pre-canvassing, and canvassing during the November 3, 2020 election; and

2. Disapproves of the infringement on the General Assembly’s authority pursuant to the United States Constitution to regulate elections; and

3. Disapproves of and disagrees with the Secretary of the Commonwealth’s premature certification of the results of the November 3, 2020 election regarding presidential electors; and

4. Declares that the selection of presidential electors and other statewide electoral contest results in this Commonwealth is in dispute; and

5. Urges the Secretary of the Commonwealth and the Governor to withdraw or vacate the certification of presidential electors and to delay certification of results in other statewide electoral contests voted on at the 2020 General Election; and

6. Urges the United States Congress to declare the selection of presidential electors in this Commonwealth to be in dispute…”

This is a relatively short decision with an interesting concurring opinion by Justice Gorsuch and an interesting dissenting opinion by Chief Justice Roberts. The interest for me lies in the apparent loss of influence and control of the court by Chief Justice Roberts. The Chief Justice couches in judicial modesty his underlying reasons for allowing governors near dictatorial powers related to Covid response. Justice Gorsuch easily and quickly destroys the judicial modesty argument.

Roberts’ turn to the left is undeniable no matter how he couches it. His concomitant loss of influence is also undeniable. It seems likely that the Chief Justice will find himself in the minority in the coming years.

The Thieves Who Stole Our Election Got Sloppy

“…Laziness leads to sloppiness, and sloppiness is how the most brazen heist in American history is being exposed.

Stealing the 2020 election was a mammoth undertaking, involving widespread lawlessness and illicit partnerships between private actors and public officials. They’ve been working to cover their tracks since Election Day, but they didn’t work fast enough. Now, the courts need to stop them from destroying any more evidence so that the people of Pennsylvania—and the rest of the country—can accurately assess the ramifications of their wrongdoing.

Explosive new litigation filed in federal district court on Nov. 21 details and documents a wide variety of illegal practices that were used to inflate the number of votes received by Democrat presidential candidate Joe Biden, including disparate treatment of voters based on where they live and outright manipulation of Pennsylvania’s voter registration system by partisan activists…”

A Personal Statement from General Flynn to America: Faith, Family, and Friendships

“…By Almighty God’s grace and with the love and courage of my wife Lori, the strength and fortitude of our families, and the inspiration of our friends and every single patriot who circled me with their prayers, wisdom, and kindness, I say thank you from the bottom of my heart. For the first time in more than four years and because of my fearless attorney, Sidney Powell, the Guardian Angel of American Justice, and thousands of good people with endless energy rallying together on my behalf, I breathe freedom and liberty today…” 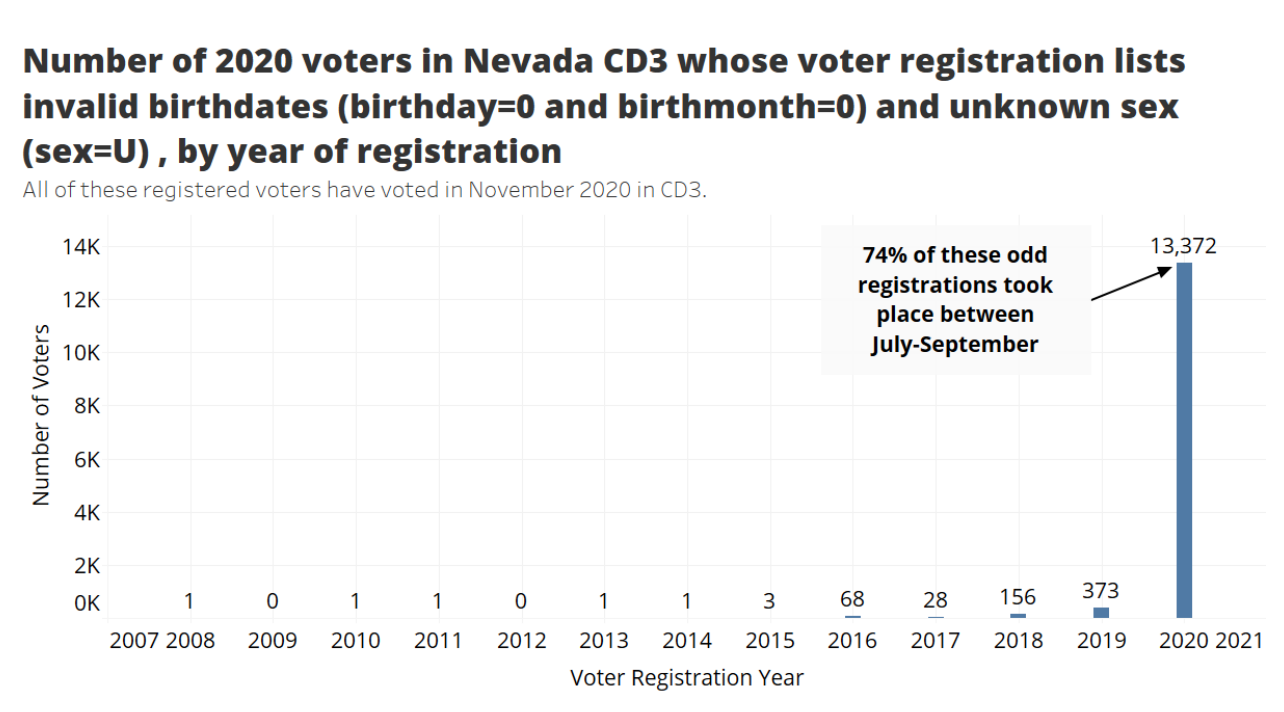 Biden can only enter the White House as President if he can prove that his ridiculous “80,000,000 votes” were not fraudulently or illegally obtained. When you see what happened in Detroit, Atlanta, Philadelphia & Milwaukee, massive voter fraud, he’s got a big unsolvable problem!